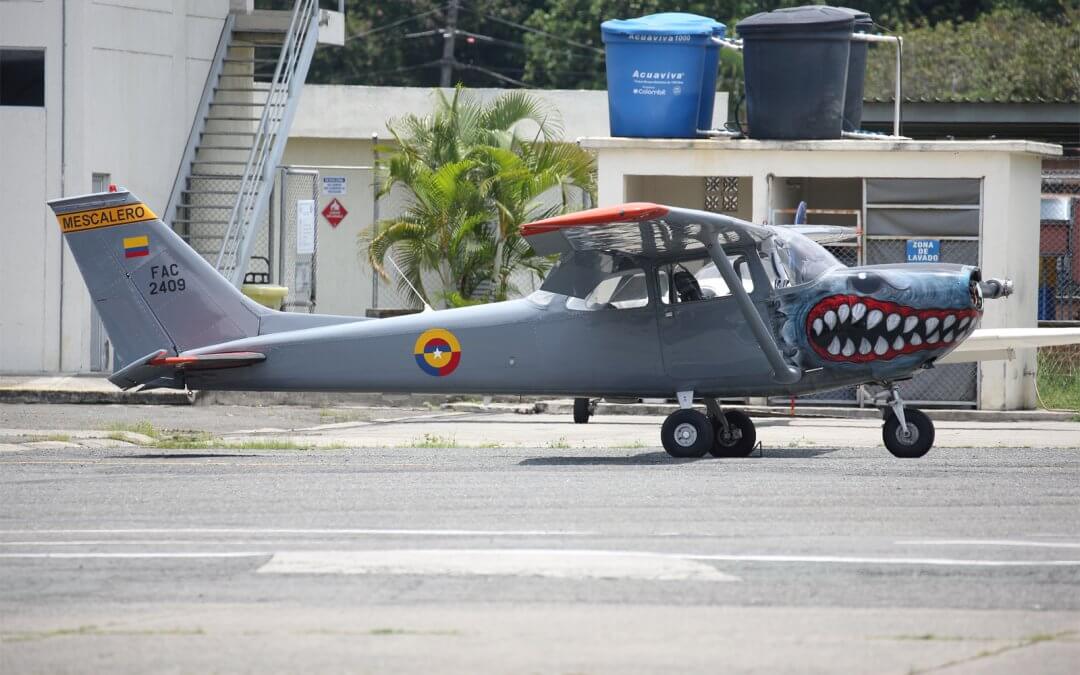 This article is dedicated to Captain Pedro Andres Rojas Forero, our guide for the visit, who very sadly died in a gliding accident a week later.

The Escuela Militar de Aviación Marco Fidel Suárez (EMAVI ) of the Fuerza Aérea Colombiana is located at Cali in western Colombia. It was established in 1919 and named after the President of that time.

The Colombian Air Force is structured into various commands and the facilities at Cali form Comando Aéreo de Combate No. 7 (CACOM 7) which consists of Grupo de Combate 71 with three squadrons as follows: 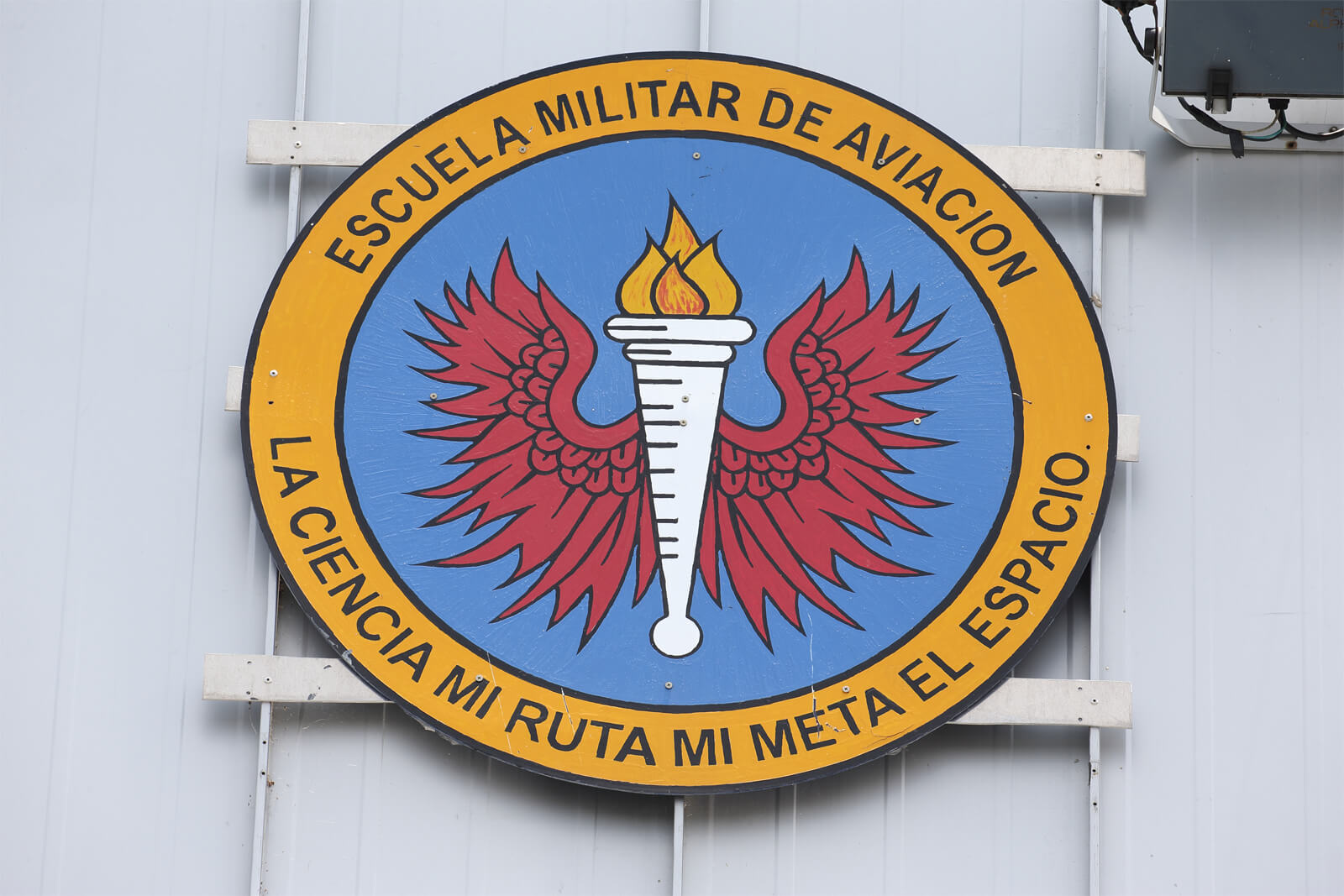 The school was initially established in Flanders in Tolima and operated by a French military mission with the first course staring in 1921.  Major Felix Castillo was the first officer to make their first solo flight in Colombia.  Unfortunately, the school soon closed due to financial difficulties but made a later restart at Madrid in 1925 using Wild WT-3s from Switzerland.  Further expansion took place in 1932 after hostilities with Peru.  Ten Curtiss Hawk II aircraft were acquired from USA and the school moved to its current location in Cali.

The school was supported by missions from Switzerland, Germany, Cuba and America as well as France.  Between 1935 and 1955, the School adopted the name of the commercial pilot Ernesto Samper and from 1936 all the preparation and operation of military aviation was in the hands of the Colombian military.

During the Second World War the USA provided Vultee BT-15A and Stearman PT-17s under the Lend Lease Programme.  Beechcraft T-34A Mentor trainers arrived in 1954 (the survivors underwent complete reconstruction and modernisation work in 1992).   In 1968 Cessna T-41 Mescalero were acquired as the primary trainer along with Cessna T-37Bs for advanced training, and in 1983 the first two gliders were acquired.  The flight training program was reinforced in 1992 with the arrival of the Embraer T-27 Tucano turboprop.

In 2010, the CIAC T-90 Calima was built and began entering service.  This was a home produced variant of the Lancair Legacy FG single engine training aircraft featuring a composite material construction.  Most aircraft were upgraded to T-90C which featured reinforced landing gear and an advanced avionics suite.  The T-90 replaced the T-34A and has partially replaced the T-41D.

All Air Force officers pass through EMAVI.  There are approximately 460 cadets on site and the course lasts four years.  100 – 120 officers graduate each year.  Four courses are offered:

ICFES (a Colombian institute that manages and evaluates educational institutes) has certified EMAVI as a Higher Education Institution.  In 2006 EMAVI received ISO 9000 certification.  In 2018, the 94th year of intake started.

The training is long and arduous and the highest standards are expected of the students.  Around 100-150 cadets enter the School each year and are selected from over 2,000 applicants.  The cadets are divided into squads of 5 to 10 cadets depending on the course.  The squads parent to an Element which consists of about 5 to 7 squads and these are then parented to Squadrons with around 3 Elements per Squadron.  Delta Squad is year one, Charlie year 2 and Bravo year 3.  Year 4 is Alpha but these are not assigned to any Squadrons nor do they have command directly over any other Squads.  However, they have complete authority over junior cadets. 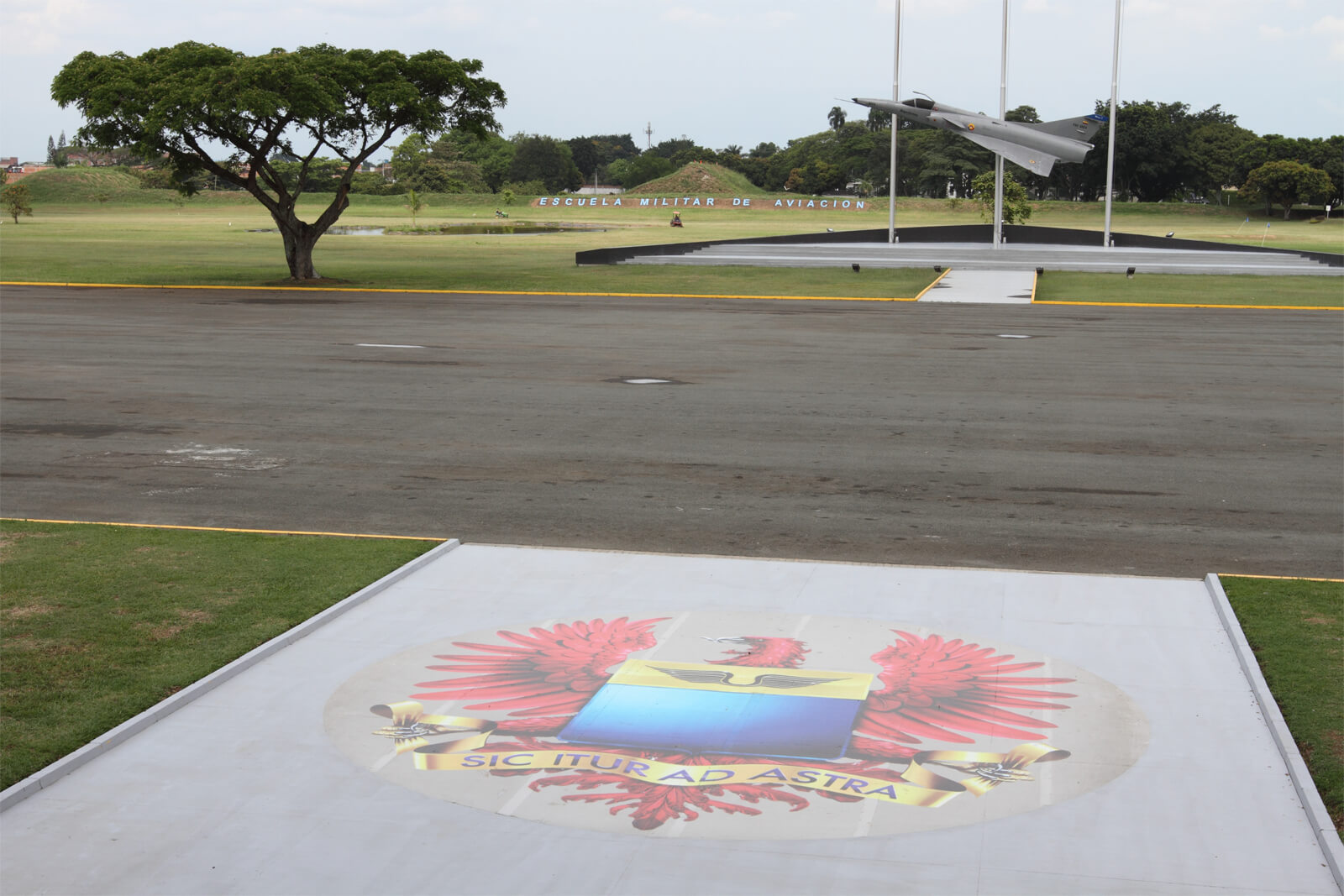 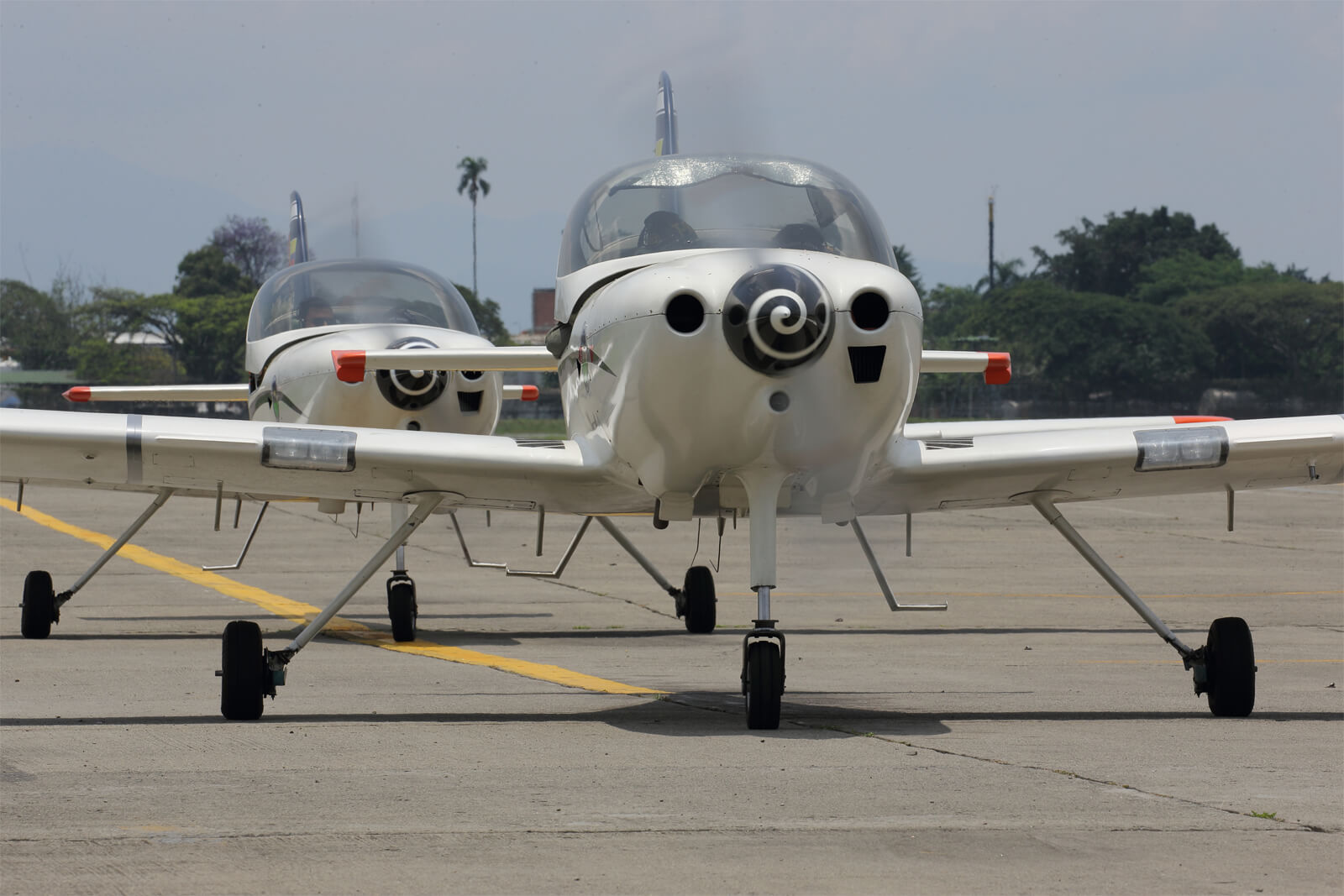 The first three months at school are, for some, the hardest to endure.  The cadet undergoes long days of military and academic-military training, where they are taught the doctrine and organisation of the Air Force and the other military entities of the state.  The cadets training includes military field training which is carried out in another military base, usually Palanquero or Tolemaida, where the cadets undergo eight strenuous days of military training with different activities ranging from rappel and field tactics to survival techniques.

At the end of this period of initial instruction, the cadets are submitted to a military committee of high-ranking officers who decide whether they will continue their training or not.  If successful, the cadets make the oath to the flag and the country and are given the arms by a relative as a symbol that they have made the decision to serve the country.

After having sworn loyalty, the cadets begin their phase of university academic education where they are trained in one of the four available courses.  From now on the life of the first-year cadet is involved between their university education and the development of their character and military training.

Each Air Force base in Colombia sponsors a classroom and decorates it which gives cadets an insight into the operations of that base.

Primary training flying begins in Year 3 and to a large extent cadets chose between the T-41D and the T-90C.  The caveat is that there is a height restriction for the T-90C due to the cramped nature of the cockpit.  The Primary qualification takes 48 – 60 flying hours and about three months.  As a new initiative in 2018, it is planned that the first solo flight will take place in a glider.

After Primary Training the pilot undergoes Basic Training in Year 4 and this will take place at a different base depending on the aircraft selected:

At the end of the training in the EMAVI the cadets receive the official rank of Second Lieutenants.

Aviation Press owns the copyrights to this articles and associated photographs. 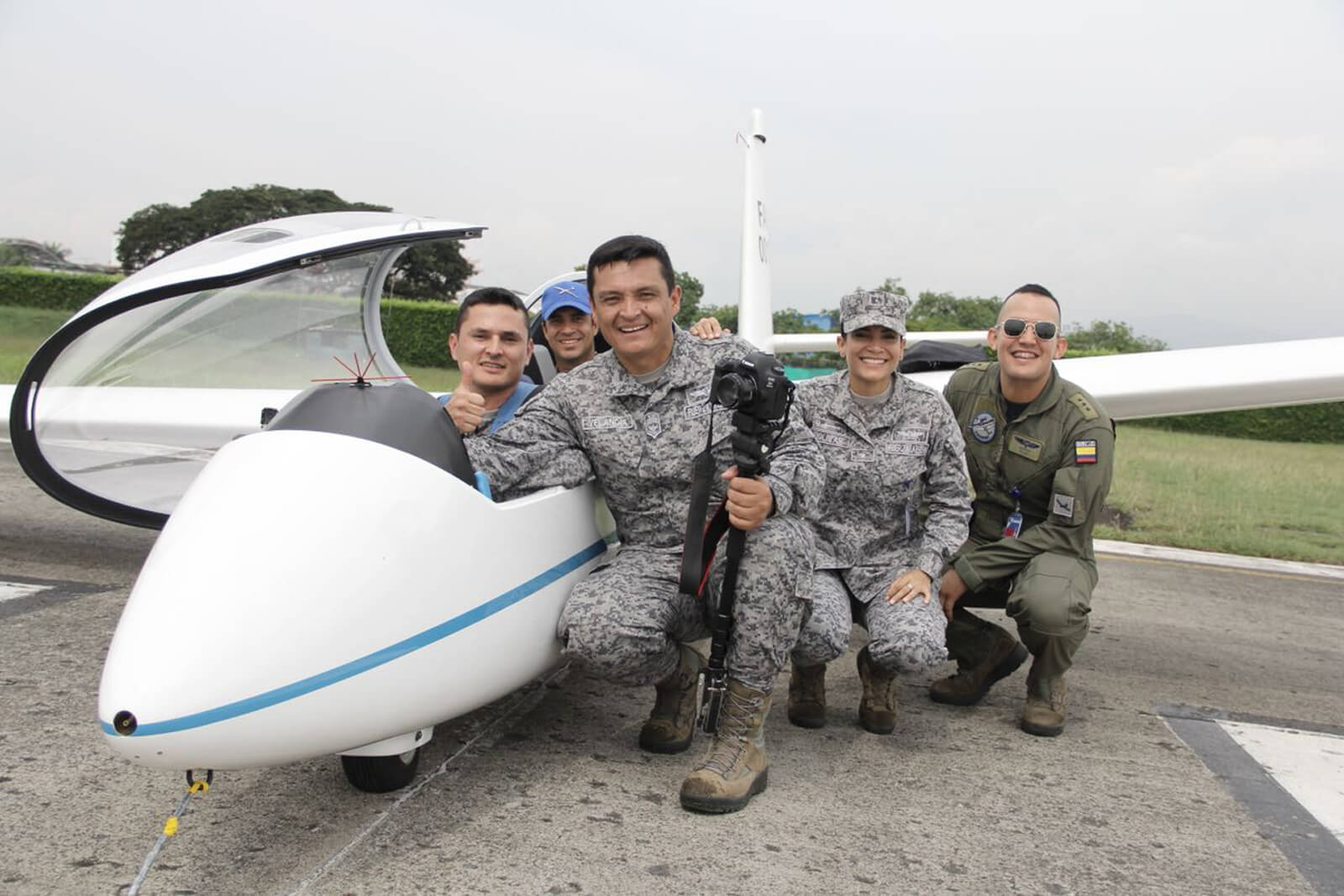 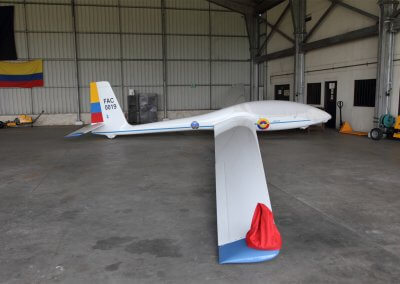 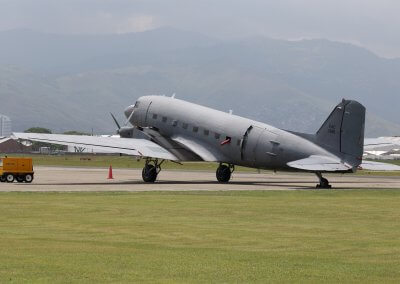 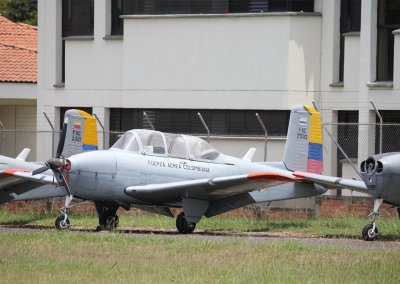 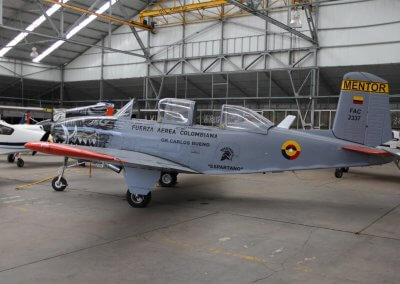 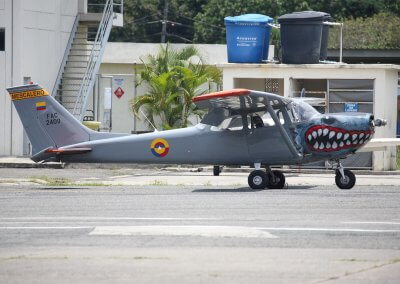 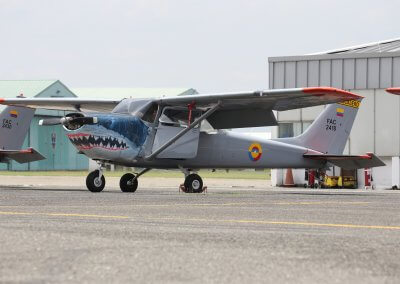 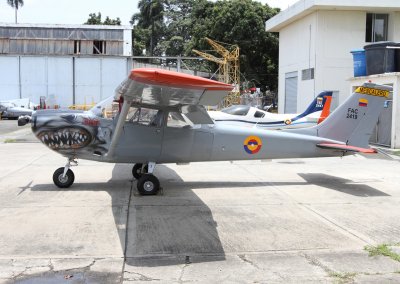 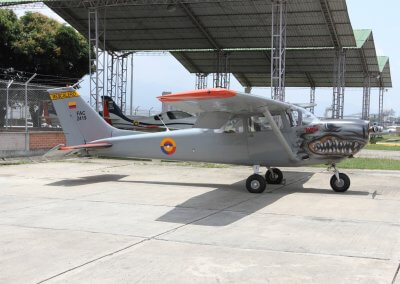 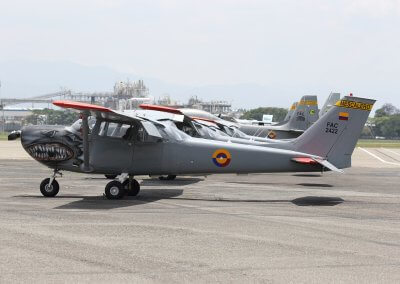 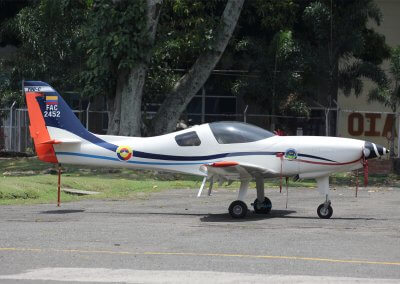 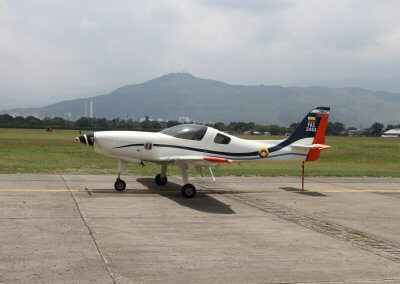 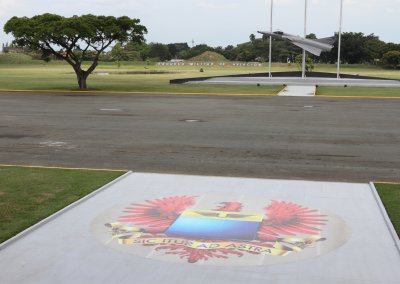 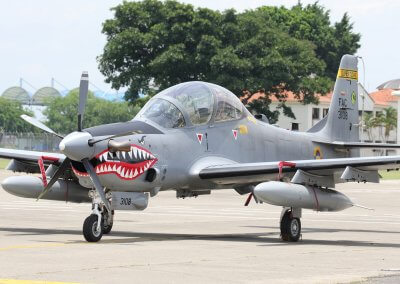 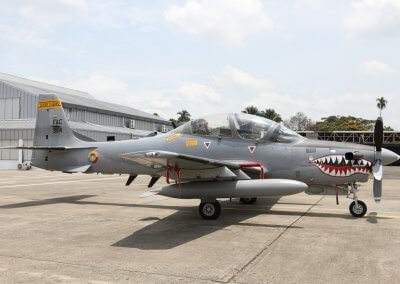 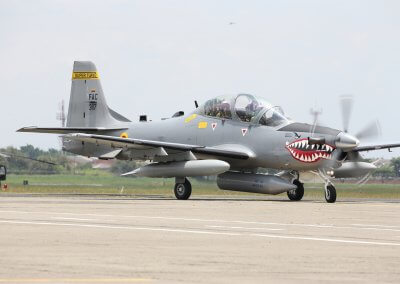 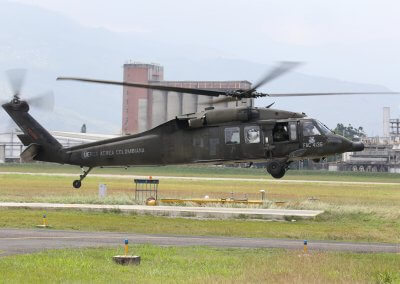 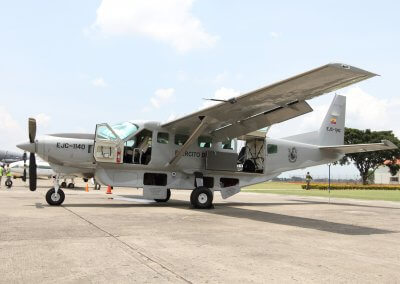 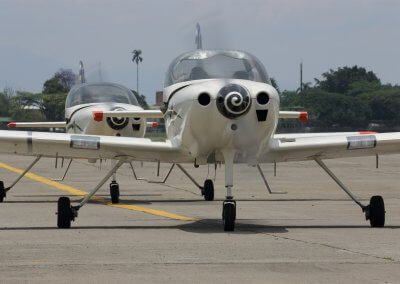 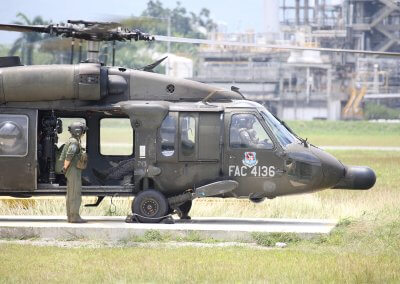 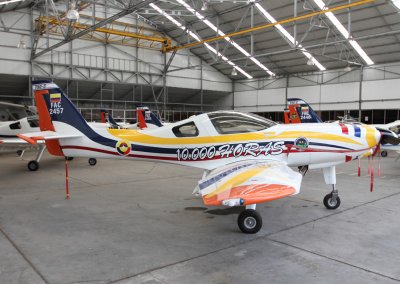