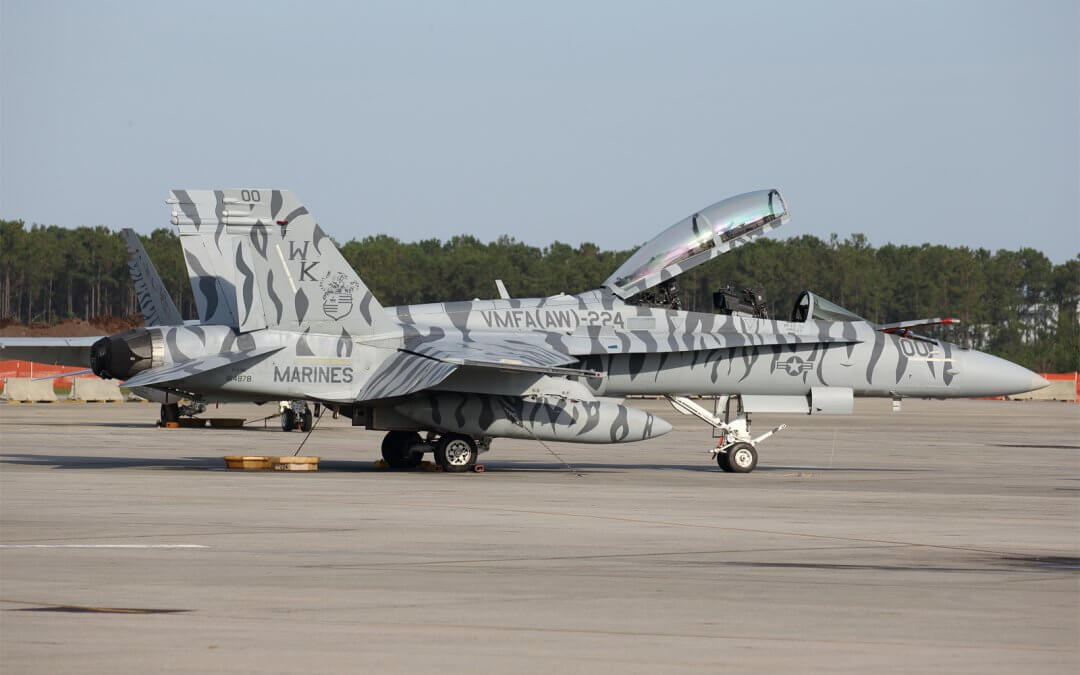 Marine All Weather Fighter Attack Squadron (VMFA(AW)-224) is based at Marine Corps Air Station Beaufort in South Carolina and is part of Marine Air Group 31 which in turn forms part of the 2nd Marine Air Wing.  The squadron was originally commissioned as Marine Fighter Squadron 224 (VMF-224) in 1942 at Barbers Point, Hawaii with the Grumman F4F Wildcat.  The squadron saw extensive action in World War II and was an integral part of the successful Guadalcanal, Marshall Islands and final Pacific Campaign to reach Okinawa. 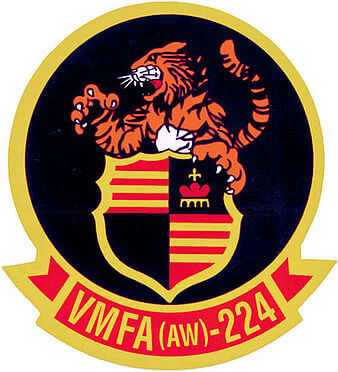 In 1951 the squadron entered the jet era with the F2H-2 Banshee and then the Grumman F9F-5 Panther.  At this point the Squadron’s designation was changed to Marine Attack Squadron 224 (VMA-224).  In 1956 the unit was the first to operate the A4D-1 Skyhawk.

The squadron undertook many cruises and deployments and was involved in the Vietnam War.  In 1996 they received the Grumman A-6A Intruder replacing the McDonnell Douglas A-4 Skyhawk and the unit was redesignated Marine All Weather Attack Squadron 224 (VMA(AW)-224).

The unit gained the updated A-6E in 1974 and operated this version for many years including its deployment to Iraq during the Gulf War I (Operation Desert Shield) in 1990.  The unit was also heavily involved in Operation Desert Storm a year later flying 422 combat sorties and expending more than 2.3 million pounds of ordnance.

In 1993 the squadron converted to the multi-mission McDonnell Douglas (now Boeing) F/A-18D Hornet and was redesignated VMFA(AW)-224 and relocated from MACS Cherry Point to its current home at MCAS Beaufort.

During 1994 to 1997 the squadron was part of Operations Deny Flight, Provide Promise, Deliberate Force, Joint Endeavour, Deliberate Guard and Silver Wake in the former Yugoslavia.

More recently in 2005 the squadron was extensively deployed to Iraq participating in the many operations that were under the umbrella Operation Iraqi Freedom flying over 2,500 sorties.

The squadron’s mission is to attack and destroy surface or air targets, day or night, to conduct multi-sensory imagery reconnaissance, to provide support to arms coordination in all weather in support of Marine ground operations.

The F-35 is beginning to enter service with the USMC and will eventually replace the Grumman EA-6 Intruder, the McDonnell Douglas AV-8B and the F/A-18.  However, as far as VMFA(AW)224 is concerned this is not scheduled to happen until the 2023-2024 fiscal years and at that time it is planned that the unit will relocated to MCAS Yuma in Arizona.

The F/A-18 is a twin engine, twin tail, multi-mission tactical aircraft with a top speed of Mach 1.8.  It is highly manoeuvrable owing to its good thrust to weight ratio, digital fly-by-wire control system and leading edge extensions. The leading edge extensions allow the Hornet to remain controllable at high angles of attack.  The trapezoidal wing has a 20-degree sweepback on the leading edge and a straight trailing edge.  The wing has full-span leading edge flaps and the trailing edge has single-slotted flaps and ailerons over the entire span.

Canted vertical stabilizers are another distinguishing design element, one among several other such elements that enable the Hornet’s excellent high angle of attack ability include oversized horizontal stabilators, oversized trailing edge flaps that operate as flaperons, large full-length leading edge slats and flight control computer programming that multiplies the movement of each control surface at low speeds and moves the vertical rudders inboard instead of simply left and right.

The F/A-18C and D models were the result of the 1987 block upgrade incorporating upgraded radar, avionics and the capacity to carry new missiles such as the AIM-120 AMRAAM air-to-air missile and AGM-65 Maverick and AGM-84 Harpoon air-to-surface missiles.  Other upgrades included the Martin-Baker NACES (Navy Aircrew Common Ejection Seat) and a self-protection jammer.  Post 1989 models (the last aircraft was delivered in 2000) also had improved night attack capabilities and aircraft could be outfitted with the ATARS electro-optical sensor package that includes a sensor pod and equipment mounted in the place of the M61 cannon.

The F/A-18D can be configured either as a 2 seat trainer or as a 2 seat all weather strike aircraft.  The strike version’s rear cockpit is configured for a Weapons Systems Officer which allows the aircraft to perform the night attack and forward air controller (airborne) roles.

Aviation Press would like to thank the Capt Clay Groover of the MCAS Beaufort PAO, Capt Andrew Willey of VMFA(AW)224 and Jon Astley for their assistance in arranging and hosting the visit. 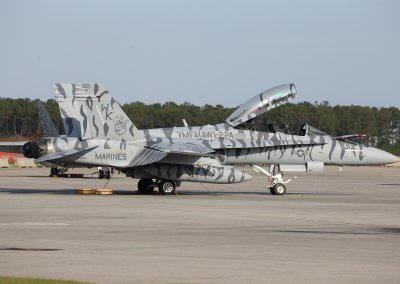 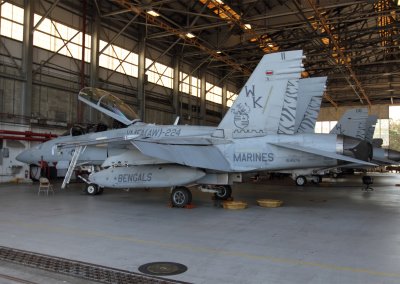 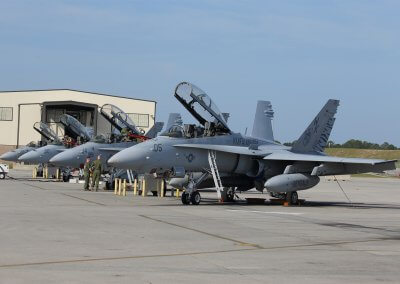 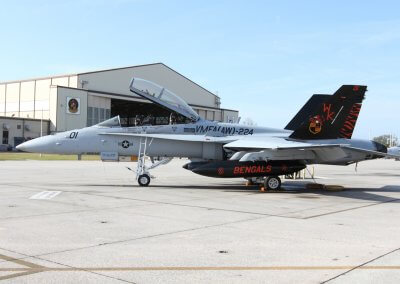 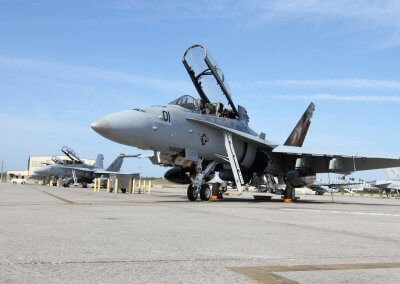 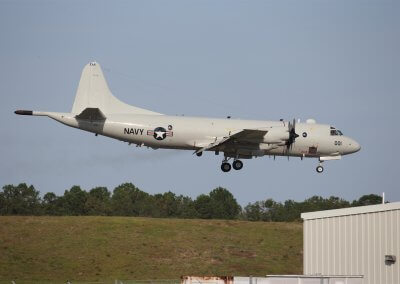 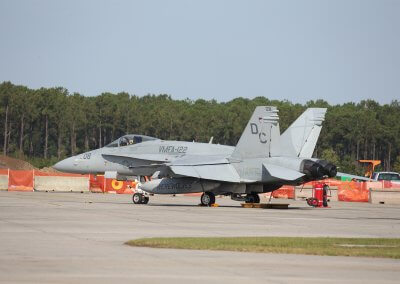 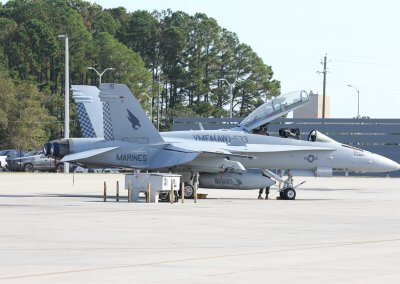 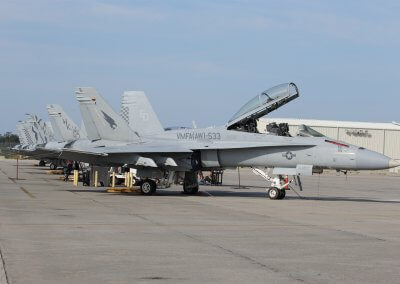 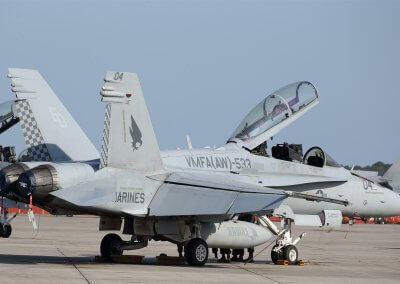